For my regular visitors, if you find that this blog hasn't been updating much lately, chances are pretty good I've been spending my writing energy on my companion blog. Feel free to pop over to Home is Where the Central Cardio-pulmonary Organ Is, and see what else has been going on.

The things we learn...

Today being Easter, I made a point of phoning "home" and wishing my parents a Happy Easter. It's been ages since I called, and I must admit, it's because I'm a coward. I dread the thought that if I phone, my mother might answer. I just never know how that's going to turn out. Usually, it gets pretty nasty, and it's not at all unusual for me to have to hang up on her, as it's the only way to put and end to her racism, religious fanaticism, or political hysteria. It isn't always that bad, though. Sometimes, I can actually steer away from the loaded subjects and we can have a real conversation. It's very emotionally draining.

And sometimes I learn things that remind me that, no matter how bad my mother gets, she's seen and experienced more than I ever will, and is a probably a much stronger and braver woman then I will ever have reason to be, in my comparatively soft and pampered life.

Today turned out to be one of those days. I know very little about my parents. In fact, just today, I learned my mother actually has nieces and nephews back in Poland. I knew her brother remained in Poland after she, her sister and parents came to Canada. What I didn't know is that he had 5 children! One of her nephews actually phoned her from Poland today to wish her a Happy Easter.

When she found out I didn't know about these relatives of hers, I was treated to another tidbit of family history. My sister has been working on a family tree, and I knew my mother had an aunt that married a Ukranian man (Poles and Ukranians - they always seemed to be either killing each other or marrying each other!). That was all I knew about her. Today, I learned more.

After WWII, the province my parents lived in was one of 2 provinces turned over to Russia and is now part of the Ukraine, in exchange for 2 provinces taken from Germany and turned over to Poland. My father was already gone, having lived the last few years of the war essentially as a slave to various German farmers. My mother's immediate family was among those "relocated" from their homes. They spent some time living in what was once the home of a German family in one of the provinces that had become part of Poland before finally coming to Canada.

Today, I learned the fate of my mother's aunt. Because her husband was Ukranian, they felt it was safe for them to relocate, together with their 3 children, to the Ukraine. They were wrong. (Keep in mind that the Ukranians that lived in the provinces my parents lived in saw what Russia was doing to their brethren on the other side of the border. To them, the Nazis were potential liberators, and many joined the German army. Since Poles fought against the Nazis, that made them the enemy, too.) I don't know now long they lived in the Ukraine, but they were attacked by Ukrainian "bandaty," as my mother called them. I'm not sure if she means actual bandits, or just a mob. Both my mother's aunt and her husband were beaten so severely, they died of their injuries.

Their three children were apparently unharmed. My mother's sister, married with children herself, was able to sponsor these orphaned nieces to Poland. The Polish government gave them assistance in various forms. The middle child, sick with TB, was hospitalised until her death not long after. Her surviving sisters were provided for, including having their formal educations paid for. The youngest of these, now in her 60's, became a nurse and is now retired. I believe the eldest sister died some time ago. My mother is still in contact with her niece, and even spoke to her recently on the phone. They met only once before my mother and her parents left for Canada, leaving behind my aunt and her family who, due to illness, weren't allowed to enter Canada until years later.

There is so much I don't know about my family. They, understandably, don't speak of their past very often. Even so, I've learned much from them. They are witnesses to history from a perspective rarely heard from - the civilian victims, too young to have fought (though my mother, like all youths, served her time in the militia), yet old enough to see and sometimes understand what they were witnessing. They are true survivors, strong and resourceful.

At times like this, I wish I knew the person my mother used to be. I have only the briefest of memories of this person. As the youngest in my family, I have the fewest of these memories, as this person was almost completely gone by the time I was born. Could the way she is now be a result of what she lived through? Could it be that her mind could no longer hold itself together after all these years? I'm told that her mother also behaved strangely, so it's possible my mother's behaviour is part of a genetic mental illness. On the other hand, my grandmother lived through 2 world wars. I know even less of her than of my mother, and it's almost by accident that I found out she'd been gang raped by soldiers in front of my mother and her sister. How many more internal demons did my grandmother have to battle? Not only the horrors of war, but being left behind by her family as they went to Canada, first her father and grandfather, then her mother. She was supposed to join them later, but the war intervened. Instead, she married at 16 - not the happiest of marriages either, from what little I know - and had 3 children.

It's when I learn little tidbits of my family, as I did today, that I realise how little I truly know.
By Kunoichi at 10:25 PM 2 comments: 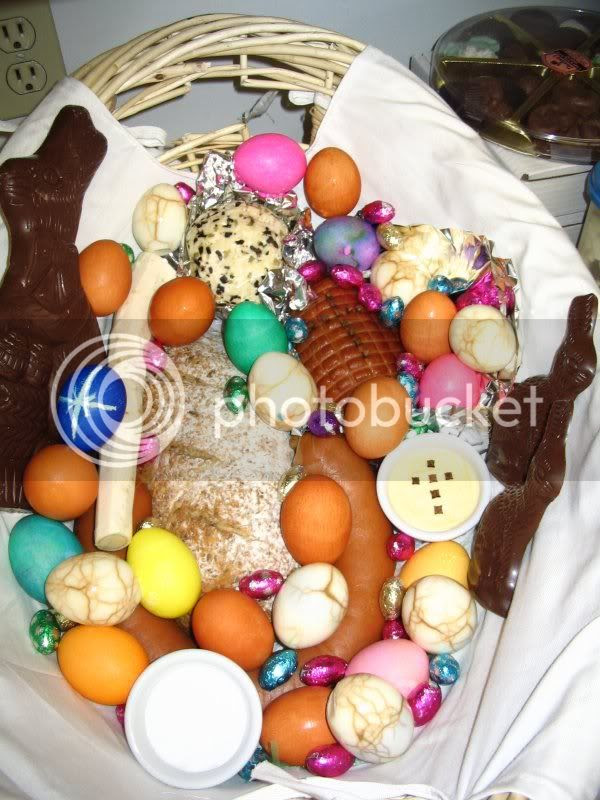 I'm stuck working this weekend, but we're still managing to swing our celebrations around my shifts. This morning, we assembled our basket for blessing, ready for tomorrow.

I wish you all a wonderful Easter, full of friends and family.
By Kunoichi at 11:50 AM 2 comments:

When the Liberals decided to send our troops to Afghanistan as one of many countries taking part in this UN sanctioned mission, there was a debate in parliament. Hardly any MP's bothered to show up for it, and it was so low key, the average voting citizen doesn't seem to know it ever happened.

After the CPC forms a new government, suddenly there are loud calls to hold a debate over something that's already done, as if it were the CPC who'd sent our troops in the first place (I won't even try to figure out how or why so many of these people seem to be confusing the UN sanctioned Afghan mission with Iraq). The PM finally agrees and a date for the debate is set...

... and hardly any MPs bother to show up?

I would have expected there to be more MPs simply because they've been "on the job" for such a short time. You'd think, with parliament being in session for what?... less than 2 weeks? ... the majority of our elected MP's would at least *try * to show up for work. That point aside, from the loud cries to hold this debate in the first place, I would've expected the MP body count for this debate to have been the highest ever. After all, it was supposed to be such an important thing.

Apparently it wasn't as important to them as they made it out to be.
By Kunoichi at 9:22 AM No comments:

Some news and related sites I use